Firstly, kids may become confused about the algorithm itself. Most often, they invert the dividend instead of the divisor, e.g.

Conceptual Modeling of Dividing with Fractions

Before fractions, division with whole numbers involves two different interpretation that are converse of each other, e.g. 12 ÷ 3 can be interpreted as “the number of units in each group when 12 units are split into 3 groups” (scenario 1) and “the number of groups when 12 units are split into groups of 3” (scenario 2). In both scenarios, the answer is the same (2), hence,  many kids treat them as equivalent, or at best two equally correct way of modeling division.

However, when it comes to fractions, these two scenarios correspond to different models.

Scenario 1 corresponds to cases when the divisor is a whole number. For example ½ ÷ 8 can be modeled by “half a pizza shared by 8 persons (1/16 of a pizza each)” or “half a pound of chocolate melted into 8 cups (1/16 pound in each cup)”.

When kids are shown examples of each scenarios systematically and are able to categorize them internally, they would be able to come up with examples without any confusion, and are less likely to make mistakes when they interpret word problems which requires dividing with fractions. 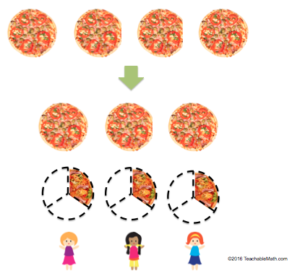 Half a pizza divided among 8 girls. Each girl will have 1/16 of the pizza. 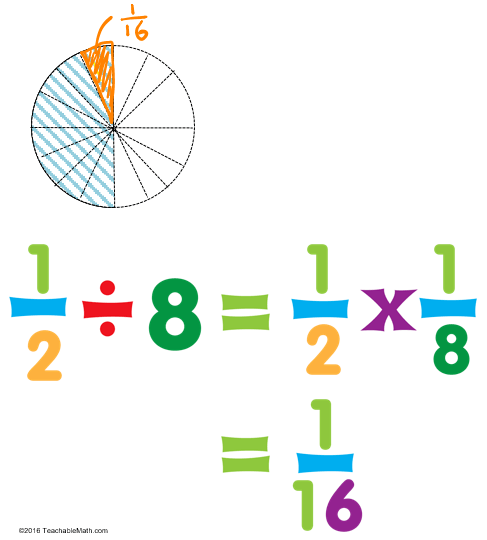 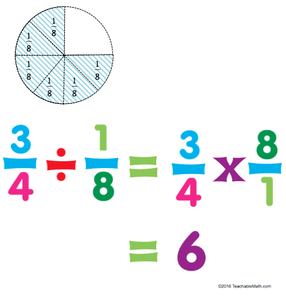 The most easily confused cases are 2) and 4), i.e. students have the mostly difficulty drawing model to explain, and coming up with scenarios for these two cases.

To develop number sense for fractions, we can also include the following thinking questions:
Without working out the answer,

In the first case, it is asking how many ⅛ are in ½? So, the answer is greater than 1.  In the second case, since we are dividing ½ further into 8 equal parts, so the answer has to been less than 1, in fact, it is less than ½.

Such questions help students build a strong number sense for fractions by questioning the logic behind dividing with fractions. They are also interesting and help break up the monotony of learning,

Dividing with Fractions is also a good chance for students to develop their inductive muscles. Let the students figure out the division rules by their own reasoning and then verify their rules with examples, before formally teaching the algorithm, for example “figure rules for calculating 4 ÷ ⅛ and ½ ÷ ⅛”.

It is time we teach the conceptual modeling of the algorithm for dividing with fractions! Not only does this make learning more interesting and meaningful, students are able at solving word problems and relate what they learn to the practical world they live in.

3 thoughts on “Dividing with Fractions”