Multiplication as Scaling is usually taught at the end of the 5th grade, in preparation for rates and proportions in 6th grade. In the 5th grade Common Core, it is listed as (CCSS.Math.5NF):

Multiplication as Scaling is also usually the final topic we cover in Fractions, so students are already proficient in handling fractions operations. As such they may see this topic as trivial, especially since the main objective of the exercise is that of gaining understanding / changing perspectives rather than getting the correct answer.

The main objective of introducing multiplication as scaling is to allow students to interpret the multiplication operation as a form of changing the magnitude or size of the original entity. In contrast to previous topics in fractions, we are now focuing on the first element on the “left-hand side” of the multiplication equation, rather than the answer on the right.

Students have been working on various fraction operations up to this point – expressing fractions in their equivalent forms, fractions addition, multiplication and division. With this topic, we’re putting a physical meaning to one of the operation – multiplication. That is, at the end of the topic, students should be able to understand that multiplying by a fraction factor changes the size of the original number, and see multiplication as scaling a quantity.

More importantly, we want students to differentiate between the resizing effect of various factors:

For this matter, we have to be mindful of the pictures we present in this topic. For example, when drawing pictorial representation to compare between 2 x 6 and 2/3 x 6, we recognize that we’re no longer trying to find the answers to these two questions, but instead are trying to understand the difference in the resizing effect the two factors have on the same number. Hence earlier area models we use as examples in fraction multiplications, such as the following, are not really helpful here.

Instead, the picture students should have in their mind should be something like this: 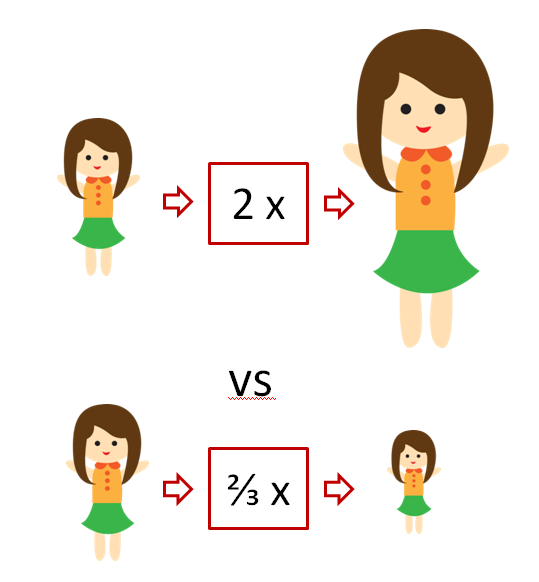 Multiplication as scaling is not restricted to fractions, after all multiplying by whole numbers is also scaling, so is multiplying by decimals. The reason why we introduce the topic of scaling at the end of the fractions module is because students now have a good intuitive understanding of what a number less than 1 is, i.e. they have the mathematical language to express such quantities or values. As such, we now have meaningful ways to compare between scaling up and scaling down. This is why we should always make sure the students have a good feel of what numbers less than 1 mean (i.e. fraction number sense) before we introduce multiplication as scaling.

At the end of the topic, it is also good to show examples of scaling by decimal factors. When students fully understand fraction multiplication as scaling, extending to decimals is much simpler, since it is very obvious which decimal numbers are less than 1 (integer component is zero), and which is not. Doing this will also reinforce the notion that decimals, fractions and whole numbers are all different ways of expressing numbers in the same number system.

As a final topic in fractions in 5th grade, Multiplication as Scaling is sometimes overlooked. This is especially since the main objective of the exercise is that of gaining understanding / changing perspectives rather than getting the correct answer. With mindful choice of pictorial presentations, students can have a better physical interpretation of fraction multiplication, and lay the groundwork for the upcoming topics such as rates and proportions in 6th grade.

This is the final part of a series of blog posts on Fractions: