Fractions and decimals both serve the same purpose of describing parts of a whole, i.e. they are two ways of expressing non-whole values. Up to 4th grade, students learn fractions and decimals as separate topics and once comfortable with both formats, they should start to appreciate the relationship between the two.

Why is Understanding the Relationship between Fractions and Decimals Important

The relationship between fractions and decimals is introduced for a very important reason – to bring these two ways of expressing values together and understand that they are both part of the same number system. The objective is to enable the students to see both fractions and decimals on the same number line and be able to both place and identify both of these formats with ease.

How and When to teach the Relationship between Fractions and Decimals

Following a spiral approach, the topic of fractions and decimals usually spans 4th to 6th grade. In the 4th grade Common Core standards, we have

Compare two decimals to hundredths by reasoning about their size. Recognize that comparisons are valid only when the two decimals refer to the same whole. Record the results of comparisons with the symbols >, =, or <, and justify the conclusions, e.g., by using a visual model. – (CCSS.Math.4.NF.7)

The following is the general approach we use for 4th to 6th grades.

Start with converting fractions with “friendly” denominators to decimals, e.g. (from Math In Focus workbook 4B Practice 7)

The denominators used in these examples are factors of 10 or 100. The objective is to let students see the relationship between the fraction concept of tenth and hundredth to decimals.

Next, extend the examples to mixed numbers (still with “friendly” denominators), e.g.  (from Math In Focus workbook 4B Practice 7)

Converting these to decimals should not be blindly expressing them as improper fractions.

Finally, express decimals as fractions in the simpliest form,  e.g.  (from Math In Focus workbook 4B Practice 7)

Throughout these examples, we use familiar pictorial representation to tie previous understanding of the two number formats together. For example, the picture for both 2.2 and 2 2/10 is:

The use of concrete and pictorial representation is very helpful for students to have a mental image of what is going on with both formats and would be important for more advanced conversion such as percent and fractions with “unfriendly” denominators.

In 5th grade, students extend the same concepts they learned for tenths and hundredths to thousandths, i.e. 3 decimals places, e.g. (from Math In Focus workbook 5B Practice 3)

Here the pictorial representation is now a 3-dimensional 1000-cube. 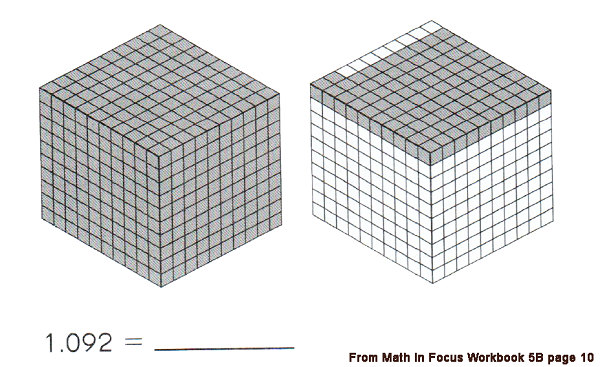 This is a good time to ask the following type of question for conceptual understanding:

In order to explain these equivalence, students have to be able to mentally picture the fractions on the grid paper, e.g. for 0.8, 0.80 and 0.800:

Keep relating these fractions and decimals to pictorial representation to reinforce the relationships between them.

Here, we see the advantage of stressing the use of Concrete-Pictorial-Abstract from the earlier years. With a strong foundation built through consistent pictorial interpretation of fractions and decimals, some of these “unfriendly” denominators fractions can be expressed as decimals without the use of long division. A few weeks ago, one of our 3rd grade students who was given an early introduction to fractions and decimals, was able to reason that

(We were so happy to watch her work through the steps).

Understanding the relationship between fractions and decimals is an important step in learning about fractions and should not be overlooked. Having learned fractions and decimals as separate concepts, students start to relate these two forms of expressing number values. At the end of the topic, students are able to see these formats as two ways of expressing values in the same number system, and are not two different concepts at all. They would then be able to see and place these values on the same number line without difficulty.

2 thoughts on “Fractions and Decimals”