What is wrong here?

Add and subtract mixed numbers with like denominators, e.g., by replacing each mixed number with an equivalent fraction, and/or by using properties of operations and the relationship between addition and subtraction. – (CCSS.Math.4.NF.3c)

Fractions, to many students, is a set of rules and procedures. Very often, we find students changing fractions to the same denominator when they are multiplying, or adding numerators and denominators separately. In writing mixed numbers as improper fractions, many students resort to memorizing procedures too, and the above example is one of the many mistakes that students make. “Do I multiply the whole with the numerator or the denominator?”, “Do I need to add the numerator after multiplying?”

One problem could be the over emphasis on procedural over conceptual understanding. Instead of starting the topic with rules, why not let the students induce the pattern by themselves?

How and when should we introduce “writing mixed numbers as improper fractions”?

If we look at the US Common Core standards carefully, the ability to write mixed numbers as improper fractions and vice versa is not explicitly stated anywhere. Instead, it is subtly mentioned as one example in CCSS.Math.4.NF.3b:

We like the way this is laid out in the overall curriculum. Writing mixed numbers as improper fractions should be viewed as part of decomposing fractions, e.g. by representing the whole number as an equivalent fraction.

This can easily progress to decomposing mixed numbers into its parts.

Similar examples can be found in the Math In Focus workbooks, e.g. 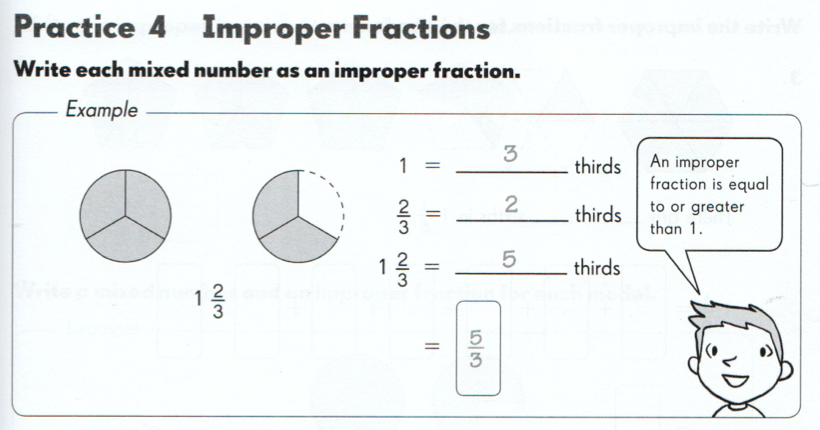 The ability to write mixed fractions as improper fractions should be taught conceptually. This topic provides an excellent teachable moment for students to reason and induce rules on their own. Instead of starting the topic with rules and procedures, try giving students time to explore and have a go at what mathematicians do!