Comparing fractions refers to the ability to distinguish the relative value of two fractions with respect to each other, in others words, to decide which is the bigger/higher/larger fraction. It is also extended to comparing multiple fractions, e.g. sorting fractions from smallest to largest. Comparing fractions appear twice in the US Common Core standards for math. In 3rd grade:

Compare two fractions with different numerators and different denominators, e.g., by creating common denominators or numerators, or by comparing to a benchmark fraction such as 1/2. Recognize that comparisons are valid only when the two fractions refer to the same whole. Record the results of comparisons with symbols >, =, or <, and justify the conclusions, e.g., by using a visual fraction model. – (CCSS.Math.4.NF.2)

The sequence of introducing the topic of comparing fractions is fairly straightforward. This is our suggested approach:

In step 3 (Different numerator and denominator), we split the questions into two groups; first group where the answer is obvious, and the second group, where the fractions are close, and hence not obvious. This is done intentionally, in order to train students to use their intuition, which we will talk about in a minute.

We should note that the “Singapore Math In Focus” and “Singapore Primary Mathematics” series of textbooks and workbooks used in the US, which are adopted from the curriculum used in Singapore, have slightly different pacing than what the Common Core requires.

The first is a methodological approach and will work every time, but may require considerable effort depending on the pair of fractions in question. The second is what we consider a training of the students’ intuition.

At first glance, the benchmark method may seem trivial (“Should we compare only with 1/2?”), unreliable (“What if fractions are close and difficult to evaluate against a benchmark?”) or “unteachable” (“Do I have to set questions specifically to test if students know how to use benchmark in comparing fractions?”).

For these reasons, the benchmark method is often overlooked by teachers, and students spend more time practicing how to create common numerators or denominators. Over time, students lose the “fraction sense” they should have; and they instinctively convert fractions to the same denominator when comparing fractions, even though the answers can be very obvious.

Why is building a student’s intuition so important?

Let’s use the example at the beginning of the blog again, e.g. “Which is greater 4/5 or 1/6? “, very often students will try to convert the fractions to say 24/30 and 5/30, then conclude that 4/5 is bigger. This shows that students are relying on mechanical procedures instead of their number sense. Isn’t it obvious to see that 4/5 is only 1/5 away from 1 whole, and hence it has to be larger than 1/6? Can they visualize the fractions in question on the number line?

Part of the reason could be the drill that we instill on students from day 1. Changing to the same denominator could be the only “strategy” they were taught! Over time, they lack the intuitive feel of the position of the fraction on the number line, and do not trust their intuition as a reliable or efficient way for comparing fractions.

In other words, very often students are trained to jump right into procedural working, rather than take a step back to see if the extra effort is necessary in the first place.

This, in the long run, can lead to tedious computation, and “math fatigue” when problem solving.

While it may not be possible to formally design a set of instructions to “teach intuition to mastery”, we feel that with some deliberate effort, teachers can encourage students to learn to trust their intuition more and take a zoom-out view of the problem at hand before instinctively jumping to procedures and algorithms.

Hence, when introducing fraction comparison with different numerators and denominators, we could separate the types of question into obvious cases where the fractions are far apart from each other (where the benchmark could be 1/2 or other values), and cases where fractions are closer in values.

Factors used for equivalent fraction conversion need not be the largest

If we do need to convert to equivalent fractions, recognize that we need not always use the largest common multiple. E.g. for 5/6 and 1/4, it is tempting to convert both to the common denominator 24 (i.e. 6×4), but instead, 12 may be an easier factor to work with.

Conversely, the equivalent fractions can be of more simplified forms, e.g. when comparing 9/12 and 6/8, we can convert to common denominator 4.

Want to see a fun way to use an interactive manipulative app to introduce Fraction Comparison? Check out the Fraction Wheel App here. 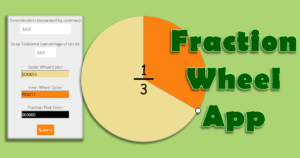 Comparing fractions is another topic that is often taught by drilling procedural methods, instead of building conceptual understanding. As a result, students are trained to dive right into converting fractions when it is unnecessary to do so. Instead we should consider how a fundamental topic like comparing fractions can be used to build up a student’s confidence in handling fractions and develop an intuitive feel of “fraction sense”!