This is the third of a 4-part series of discussion on teaching Addition and Subtraction in early elementary levels. For the other parts of this series dealing with other number ranges, please refer to the following links:

Learning about addition and subtraction for numbers to 100 is the next phase after numbers to 20. In this series, we’ll talk about the teaching approaches we recommend for numbers from 20 to 100 and the common problems faced by students.

Basic mastery of addition and subtraction to 20 is foundational for proficiency in numbers to 100. For a discussion of the common pitfalls and strategies for teaching numbers to 20, please refer to Part 2 of this series of discussion on Addition and Subtraction.

General Strategy and Order of Instruction

If possible, apply the spiral approach and teach these two topics separately, with a small topic, e.g. Measurements or Shapes in between. This spiral approach not only allows student time to absorb and internalize the lower range of 20-40 before they tackle the more demanding range of 40-100, it also breaks up the seemingly gigantic tasks of learning to add and subtract proficiently within 100 into two smaller steps.

Within each of these two topics / number range, we recommend teaching in this sequence:

With these in mind, we’ll further discuss what each item involves and highlight some common pitfalls encountered.

A common pitfall for students when mentally counting on (and similarly when counting backwards), is to include the initial number, e.g 28 + 3 is 28, 29, 30 instead of 29, 30, 31. To minimize this, we find it beneficial to start with the number line. A good grasp of the number line is also crucial for building a strong number sense.

In general, first and second graders should be proficient in using the number line, for both counting on and counting backwards.

Place value is a key concept for regrouping. Kids must fully appreciate, for example, that 36 = ? tens and ? ones = 3 tens 6 ones

However, many kids can answer addition and subtraction questions without fully understanding place value. They simply break the numbers, e.g. 36 into 3 and 6, and place them into the respective tens and ones boxes. A good way to test their understanding is to ask them the following.

Adding and Subtracting Multiples of 10

Students should be comfortable adding and subtracting multiples of tens, e.g.

Students need to appreciate that the number 14 is composed of 1 ten and 4 ones, the number 20 is composed of 2 tens. To add the numbers, we add the ones and tens separately. Number bonds that reminds the students that 14 is made up of 10 and 4 can be very useful at this point.

Another good teaching aid is the hundreds chart, where students are able to relate that the numbers increase in multiples of ten as they go down columns in the chart.

In this example below, students are asked to fill in the missing numbers in the partial hundred chart.

Students generally do not have problems coming up with the correct answer for Addition Without Regroup. However, it is worthwhile to understand the strategies that the students are using. At this stage, many would still rely on counting on. While it is not mathematically incorrect, research has shown that students who are able to leverage and apply their understanding of place value, tend to do better in the later years.

In adding a 2-digit number to 1-digit number (e.g. 23+5), an easy and effective way is to decompose 23 into 2 tens and 3 ones, then proceed by adding ones and tens separately.

Addition With Regroup is often more tricky, and students need 2 basic foundations skills to do well.

Students should be able to answer these questions on place value before proceeding.

It is important for students to connect between the three representations and understand the place value concept. This is crucial for the standard algorithm setup in the next phase. 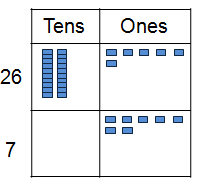 Many students do not have problems giving the correct answers to the standard algorithm setup. However, it can be tricky to find out if they are “following procedures” or “doing with understanding”. Here are a few methods we use. 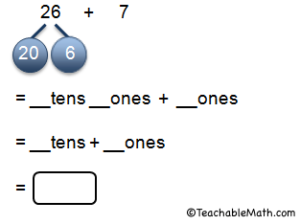 b. We use place value language in teaching and learning the standard algorithm. For example, instead of saying “1 plus 1 is 2”, we say “1 ten plus 1 ten is 2 tens”. 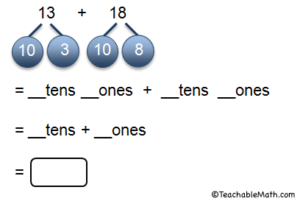 a. Often, the components of the standard algorithm for addition or subtraction are pre-populated with the correct numbers. To test students’ understanding of place value, we use an intermediate step of providing empty boxes for the students to fill in the corresponding numbers. 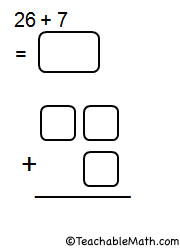 In the example above, many students will fill in “7” in the tens value for 7 + 26. However, after getting the answer and comparing with the previous answer to 26 + 7, they would have realized that since 26 + 7 should have the same value as 7 + 26 (commutative property), something must be wrong with their working!

b. A lot of students are used to composing a ten in standard algorithm computation. Non-examples are a very useful way to show that the number that is “carried over”, represents the tens place value, and does not necessarily have to be “1”. For example, quiz the students on sums such as “56 + 8 + 7”. The sum of the ones is 21, the tens composed is “2”, and not “1”.

Subtraction is usually presented as “take away”. In “Math Power – How to help your child love math even if you don’t”, Patricia Clarke talks about the importance of exposing our students to different concepts of subtraction.

The following are some examples.

Subtraction for numbers 20 to 100 usually takes twice as long to master, in comparison to addition. There are two primary reasons for this. First, they do not have strong sense of place value. Secondly, they are still struggling with subtraction within 20.

Similar to Addition Without Regroup, many students do not have difficulty with Subtract Without Regroup. However, it is again important to scrutinize the strategies that some of the students might be using. In “What’s Math got to do with it?”, Stanford Math Professor Jo Boaler talks about the “difficult mathematics that below-average children were using.” In computing 16 – 13, instead of decomposing 16 and 13 into tens and ones, subtracting tens and subtracting ones, below-average children would start with 16 and start counting backwards (16-15-14-13-12-11-10-9-8-7-6-5-4-3).

The cognitive complexity of this task is enormous and the room for mistakes is huge.

This mathematical difficulty, if not intervened at an earlier stage, can extend to larger numbers to 40 and beyond. Students who have a strong foundation in place value can often make sense of addition and subtraction for larger numbers without any additional instructions from their teachers.

When using the standard algorithm, it is important to use “place value language”.

Using the following example, we can use “16 ones subtract 9 ones” and “4 tens subtract 3 tens” instead of “16 subtract 9” and “4 subtract 3”. This would allow students to see that we are subtracting 30 from 40 instead of discrete numbers 3 from 4. This is especially important when we move to big numbers in the hundreds.

Relationship between addition and subtraction

Most of the previous strategies used for numbers to 20 should be revisited for this number range, e.g.

In addition, another good strategy to introduce at this stage is halving numbers. Generally, while students find it easy to double numbers, they find the reverse (halving) challenging. Kids usually have a lot of fun breaking “big” numbers into half.

For more advanced students, they can be introduced to break-apart strategies such as:

Number skills such as these will come in very handy later on in 5th/6th grade, where the students tackle procedures to find Least Common Multiples, Greatest Common Factors, Prime Factorization, Square Roots and Cube Roots. In our observation, students who have not acquired these skills by upper elementary levels often spend too much time processing simple math such as 72 divided by 2 etc, which slows them down when dealing with the complex procedures which often leads to frustration and “giving up”.

By this stage, kids can practise using the mental number line for intuitive reasoning. For example, they can reason that 23+5 is less than 33+5 and 37-20 is less than 40-20.  They should be able to compare two sets of numbers without working out the answers .