This is the second of a 4-part series of discussion on teaching Addition and Subtraction in early elementary levels. For the other parts of this series dealing with other number ranges, please refer to the following links:

Last week, we talked about the common pitfalls and misconceptions when it comes to teaching and learning addition and subtraction within single digit numbers up to 10. This week, we are going to talk about the problems young learners encounter when they extend their learning to numbers within 20.

Addition and Subtraction to 20 is an unique milestone because it is the first time kids are exposed to concepts like place value and regroup. Many rely on counting for addition and subtraction within 20. While this is perfectly fine for young learners, they should also be exposed to concepts like making ten, decomposing ten and derived facts. This would go a long way in building a strong foundation in number sense.

Let’s look at several areas where young learners frequently encounter difficulty in addition and subtraction within 20.

The first hurdle kids face is usually the concept of place values. When given 12 units to count, arranged in 1 group of ten and 2 ones, many kids will start counting from the first number 1, 2, 3,…. They often fail to see that 12 is actually 10 + 2. This can lead to difficulties in adding and subtracting and often what differentiates the higher achieving and the below average students, as can be seen in the later paragraphs.

Interestingly, kids from some Asian families in our class have less problem with this. This might be attributed to the structure in some Asian language. For example, the Chinese word for 11 is “ten-one”, for 12 is “ten-two”, for 22 is “two-tens-two” etc. With this intuitive feel in place value, this advantage can be carried over to addition where 22 + 25 = “two-tens-two” + “two-tens-five” = “four-tens-seven”.

B1. Addition within 20 without regroup 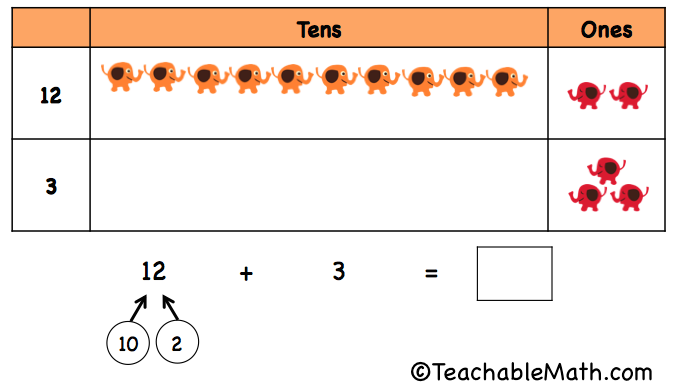 It is not wrong (nor uncommon) for kids at this age (first grade) to rely on counting on to get the answer, i.e. 13, …,15. Again, we should encourage kids to use numbers flexibly. Research has shown that students who are achieving at high levels are those who had worked out that numbers can be flexibly broken apart and put together again.

B2. Addition within 20 with regroup

1. Addition by composing a ten

This is another learning hurdle for young learners. For example,

From our experience, we find that many kids do not have problem solving 4 + 8 with manipulatives (Concrete). They do not have problem breaking apart 8 into 6 and 2 either. However, when faced with the mathematical equation 4 + 8 (Abstract), many are lost and do not know where to start.

In the example below, we use magnetic erasers to represent decomposition of the number 8. Under the number bonds, the words “make ten” and “the rest” are written to carefully label the parts. This is similar to labeling our number bonds into “part”, “part” and “whole” for our beginning students in our previous blog on addition and subtraction within 10. 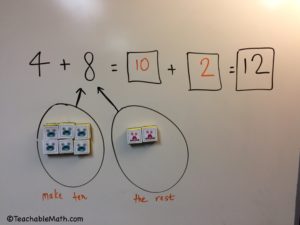 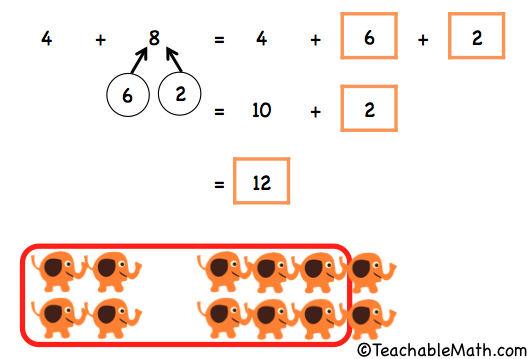 Some will question the importance of this when the answer can be derived easily by counting. However, we find that kids who have a strong number sense tend to have an easier time when dealing with larger numbers in the later grades. This extends not just to addition and subtraction, but to multiplication and division of fractions and decimals as well.

For some reasons, kids take to things that occur in pairs more readily. We observed that for young kids first learning to add, the concept of doubles is more intuitive than others. For example, teaching 6 + 6 is way easier than teaching 6 + 7.

The second step is to introduce derived facts based on these doubles.

We can introduce derived facts based on making tens, i.e. for numbers close to 10, make 10 first then count back. For example,

Professor Jo Boaler, in her book “What’s math got to do with it?”, talks about the importance of derived answers and how a fluency approach, in contrast to the rote memorization approach, allows students to develop a more meaningful mathematical experience. She also talks about how that strong number sense extends to later years where research has shown that if kids can comfortably identify these equivalent expressions earlier on, they tend to do well in later years.

“The researchers drew two important conclusions from their findings. One was that low achievers are often thought of as slow learners, when in fact they are not learning the same things slowly. Rather, they are learning a different mathematics. The second is that the mathematics that low achievers are learning is a more difficult subject. “From Professor Jo Boaler, in her book “What’s math got to do with it?”. 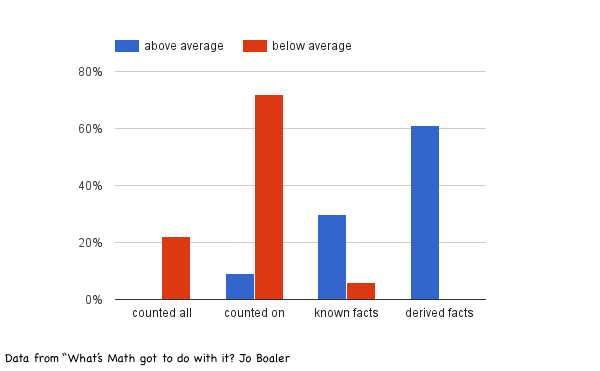 (i) When two of the numbers make ten,

Students do not usually have problem with this, especially when the two numbers that make ten are next to each other. Through our research, we know that students learn better when hand gesturing is introduced in classroom instruction. We took it a step forward, and introduce hand gesturing in our concrete-pictorial-abstract approach, and find that our students could apply this new knowledge very well.

For example, in adding 6 + 4 + 2, students are asked to V-point gesture with their fingers under 6 and 4, metaphorically grouping them. They can then told to draw the number bond under these two numbers to make ten. The result is the abstract representation of 10 + 2 = 12. 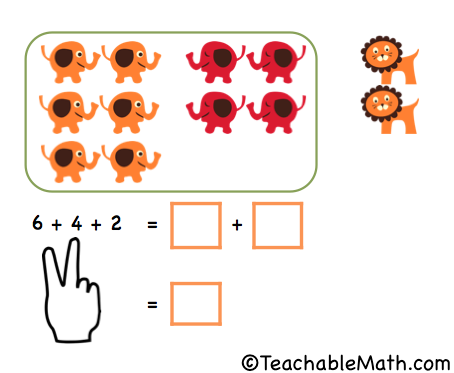 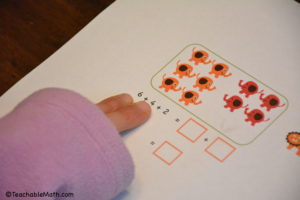 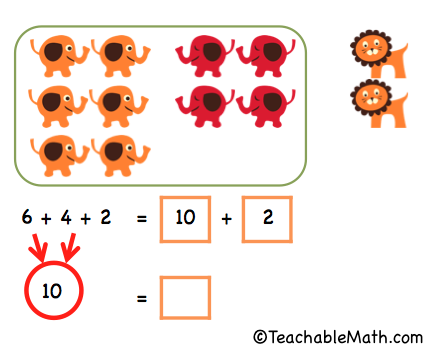 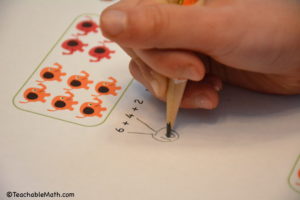 For numbers that are not next to each other, the same method can be used, where students V-point gesture with their fingers under the two numbers that make ten and draw the number bond under these two numbers. 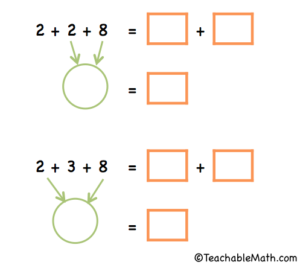 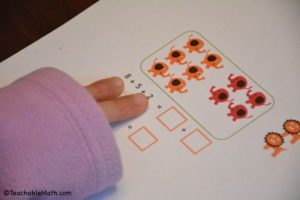 (ii) When none of the numbers make ten directly,

In this case, students need to decompose one of the numbers so that one of the component can make 10 with another number. 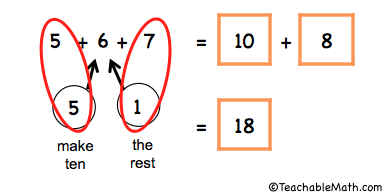 As this is new and often a struggle for 1st graders, many students would rely on back on counting. From our experience, we find that though many 1st graders may not “get it” the first time, it is important to introduce this flexibility from an early age, to show them that counting is not the only method. As mentioned by Jo Boaler, “students who were achieving at high levels were those who had worked out that numbers can be flexibly broken apart and put together again. The problem for the low-achieving children was simply that they had not learned to do this.”

Note: There is an interesting article on, “From action to abstraction: Using the hands to learn math”, published online by Psychological Science. To find out more on how gesturing can help mathematical equivalence, see this article published by Jann Ingmire from the University of Chicago.

C1. Subtraction within 20 without regroup

Similar to adding within 20, students should comfortable with place values and decomposing a 2-digit number into tens and ones. They should know that in subtracting 2-digit numbers, one subtracts tens and tens, and ones and ones. A great example is given in Professor Jo Boaler’s book, “What’s math got to do with it?” where below-average children, when given a problem 16 – 13, would start at the number 16 and count-down 13 numbers (16-15-14-13-12-11-10-9-8-7-6-5-4-3). “The cognitive complexity of this task is enormous and the room is mistakes is huge. The above-average children did not do this.”

C2. Subtraction within 20 with regroup

Subtraction within 20 another major topic to cover at this stage. From our experience, apart from counting, there are three methods that Subtraction is usually taught in schools.

1. Subtraction by decomposing to a ten

This is another challenging concept to learn for some kids. For example, 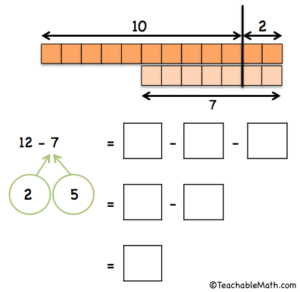 From our observation, kids have no problem understanding this concept when presented with concrete manipulatives, e.g. with 12 pieces of magnetic cubes on white board, but have difficulty translating it to paper, i.e. they cannot find the link between the concrete and the pictorial representation.

2. Subtraction by removing ones from ten

This is another popular strategy found in many textbooks. However, through our classroom experience, we find that many of our students have difficulty with this strategy, which lead us to our recent blog post on “Subtraction within 20 – Cost of working memory”. Through our reflection, we find that students generally find “decomposing to a ten” less tedious, and this could be due to the lesser working memory demands.

An example of “Subtraction by removing ones from ten” method is given here. In this method, since it is not possible to take away 7 from 2, the student first takes away 7 from 10. The student then adds the remaining 3 to 2. 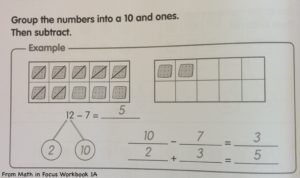 3. Subtraction by understanding subtraction as an unknown-addend problem

We find that a good way to start is to use missing addends, e.g.

While working these types of problems, we find it useful to relate number bonds to family of number facts. After working with these missing addends problems for a while, students will be familiar with the family of numbers, 6+5=11, 5+6=11, 11-6=5, 11-5=6 and will know that,

Another way is again to use derived facts. For example