This is the first of a 4-part series of discussion on teaching Addition and Subtraction, for numbers to 10. For the other parts of this series dealing with bigger number ranges, please refer to the following links:

Note: Look out for a free set of worksheets for students to practice addition and subtraction for numbers to 10 at the end of this blog post!

Singapore Math, with it’s strong emphasis on visualization, is especially well-suited to introducing this topic to young learners who have just started their journey in math education. In this discussion, we explore some of the less obvious misconceptions when first introducing addition and subtraction for numbers to 10.

Many kids have this misconception that the equal sign (“=”) is the prefix for answers, they see the equal sign as a prompt to write the answer to a question. Yet others may see it as a “step-separator”, where it separates parts of a multi-step working.

These are not correct.

What are the ways to foster the meaning of the equal sign? We find the beam and missing addend strategies to be very effective for young learners.

Add by counting on, and subtract by counting backwards is a common first strategy used to teach addition and subtraction. In the case of addition, students start with an initial number and counts forward. It is not uncommon to see kids using the initial number as starting point , and thus ending with an answer that is one short.

For example, when asked to add 2 to 6, a student sticks out one finger and says “6”, then sticks out a second finger and says “7”. Since she has done the “finger” procedure twice, she concludes that she has finished adding “2”, so the answer should be “7”.

While this seems simple, it is a very common mistake we see in young kindergarteners and first graders. We find the number line to be very effective in eliminating this misconception. Number of hops on the tick-marks can be used.

Also, it is more efficient to start with the greater number. For example, for 6+2, one would start counting from 6 instead of 2.

One very important concept kids need to understand at this point is “making ten”, where they need to know which two numbers make up the number 10.

The importance of this will be evident when dealing with “adding by composing a 10” and “subtracting by decomposing to a 10” problems, such as

How do we introduce “make ten” for our young learners?

There are many ways and we start with concrete manipulatives. For example, we can use number bond bracelets where 10 beads are made into a bracelet for counting.

We can move on to pictorial representation in the form of number bonds and ten-frames.

This Concrete->Pictorial->Abstract progression is especially effective for young learners as it bridges the gap between concrete and abstract representation.

The number bond is an important tool for early math education. To date, we have seen several different ways of drawing the number bond symbol. For example,

The reason why teachers and publishers use different orientations is perhaps to achieve what Dienes refer to as mathematical variability [1].

In our experience, introducing different number bond orientations too early has a tendency to backfire. Firstly, for students new to number bonds, being exposed to various orientations at the same time confuses them. Secondly, some number bond orientations are less intuitive than others. Using the example below, I find many students getting confused and putting 7 in the top right bubble of the number bond. 7 is the “whole” and should be placed on the left “whole” bubble instead. I wonder if this has anything to do with our standard number equations, where the “whole” is usually on the right, e.g  3 + 4 = 7.

To get things right, we only use the number bond in one fixed orientation for the first few weeks of our class. We also choose the number bond with the “whole” bubble on the right, one that aligns with our standard number equation, e.g  3 + 4 = 7.

To emphasize the different parts of the number bond, we label them clearly, and correct the kids whenever they get it wrong. Sometimes, we even make the circle for the “whole” bigger the “parts”.

Number bonds in different orientations are then introduced after the students are comfortable with the basic “part-part-whole” concept. We find this approach very effective for our students. By the time the first graders are comfortable counting to 10, they would have a strong understanding of the number bond and the relationships between parts and whole.

Missing addends as foundation for subtraction

The foundation for subtraction can be gradually introduced while doing addition to 10. We find that one great way of doing this is by using exercises involving missing addends. Two types of missing addends cases are described below:

then finding the missing addend given another “part” and the “whole”.

Then introduce a mix of missing “parts” at the top and bottom.

When the students have enough practice with the missing parts number bond, they would have grasped the concept of missing addends in equations and could easily move on to subtraction.

We hope you find this discussion on the teaching of “addition and subtraction for numbers to 10” useful. Next week, we will talk about the first major step young learners take in their counting journey – extending their understanding to the first place value outside single digit numbers, for numbers up 20. We find that this is usually the most challenging, both for teachers and students! Stay tune!

Looking for some practice questions on Addition and Subtraction for numbers to 10? Click here to download a free set of pdf worksheets now! 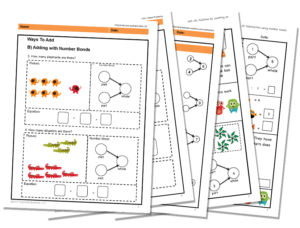 3 thoughts on “Singapore Strategies for Teaching Addition and Subtraction – Part 1: Numbers to 10”